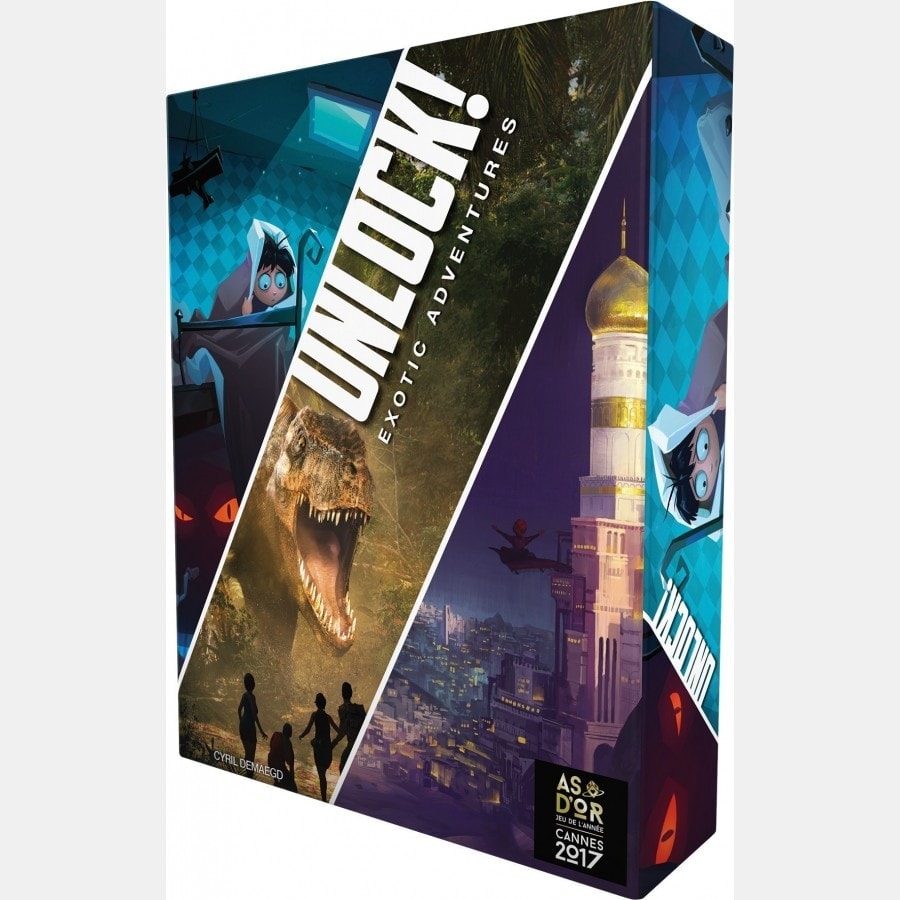 The fourth installment in the Unlock! Range, the cooperative card game inspired by escape rooms, awarded the Ace of Gold at the 2017 game festival in Cannes, returns with 3 new exciting new adventures. Unlock! Exotic Adventures is an independent box. Solve the puzzles and unlock the secrets of these 3 new tests!

The night of the croquemitaines: The croquemitaines have invaded Guillaume's dreams and are turning them into nightmares. Join forces to chase them and appease the little boy. The last tale of Scheherazade: Scheherazade has no more inspiration and the Sultan will condemn her to death. Save her on an adventure worthy of the Thousand and One Nights! Challenger Expedition: Explore a valley teeming with dinosaurs and all kinds of dangers. Your objective: save the members of Professor Challenger's expedition! Unlock! Exotic Adventures is a cooperative card game inspired by escape rooms. Escape rooms are rooms from which you must escape in less than 60 minutes. Unlock! Exotic Adventures makes you relive these experiences at home around a table. The free Unlock! App, compatible with Android and iOS phones and tablets, is required to play. It makes it possible to obtain clues, to locate hidden objects, but also to enter the codes discovered. It also contributes to the atmosphere with its music dedicated to each adventure, its audio puzzles, its terrible penalties and its fatal countdown! In order to fully understand the rules, the box contains a dozen cards serving as a tutorial. Age: from 10 years Number of players: 2-6 Duration of the game: 1h Contains: 1 rulebook, 180 cards (60 + 60 + 60), a tutorial of 10 cards, a notebook and a sheet